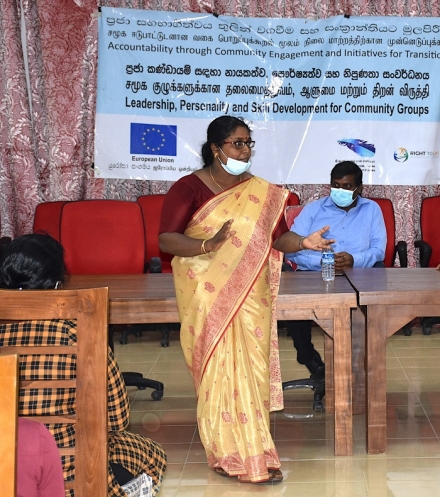 A training programme for marginalised groups on leadership and good governance was held on Delft Island in the Jaffna District with the participation of 60 people under NPC’s project Community Engagement and Initiatives for Transition (ACE-IT), which in funded by the European Union.

The programme was organized with approval from the Delft Divisional Secretary, Public Health Inspectors and the Police officers according to Health Ministry rules and regulations such as washing hands, sanitising, temperature checks before entering the premises, wearing masks and in a one metre distanced seating arrangement.

Project Coordinator N. Vijayakanthan outlined the objectives of the project and explained the rights that were given to marginalised groups and the benefits they could get from the government.
Participants were told how they could obtain benefits from new state mechanisms such as the Human Rights Commission, the National Police Commission, the Right to Information Act and the Office on Missing Persons.

Many people had not received the Rs. 5,000 given by the government to assist people during the time of the Covid-19 pandemic.

NPC Executive Director Dr. Jehan Perera spoke on the concept of rights and how to obtain those rights as citizens of the country.

Mrs. Komathy Mayakrishnan, a resource person, taught participants how to make a snack and some of them said they would start small businesses making the product from their homes.

The participants discussed the upcoming general elections and heard advice on how to choose a good parliamentarian.

They requested assistance to start small businesses such as making clothes from old material and growing aloe vera for processing into skin care products.

“We do not have enough clean water so we want a project to make drinking water from salt water,” said Nirmaladevi Rajayogam from Nadukurichchi.