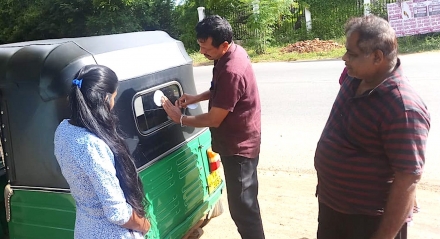 The meetings started with a briefing on Covid-19 relief activities that were conducted by the DIRCs during the curfew where they distributed dry rations to low income families including women-headed households and differently-abled people. Rations were also provided to orphanages, elders’ homes and long term care institutions for differently-abled people. The programme was funded by the Canada Fund for Local Initiatives and Misereor.

The DIRCs spoke about their roles in assisting people who were suffering economically as a result of the lockdown that could cause a breakdown of the religious and ethnic harmony existing in the area.

The discussions also centered around the importance of the 19th Amendment and how it had helped to strengthen democracy in the country with the establishment of independent commissions, the Right to Information Act, and diminishing the executive power of the President and delegating it to the Prime Minister and Parliament. They also spoke about the importance of carrying forward the message of voting responsibly to choose candidates who were capable of establishing national policies that could help the country to progress socially and economically.

Most DIRCs spoke about how the use of hate speech and fake news during election campaigns could endanger existing ethnic and religious harmony and how it was important to counter these messages of hate targeting a specific community or religion.

Galle DIRC decided to create a Facebook page to publish messages of care and peace to counter hate speech and to maintain a WhatsApp group so members could share their stories and experiences of interventions to encourage each other.

DIRCs in Matara and Kurunegala carried out a billboard, banner and sticker campaign to emphasise that no particular community should be targeted for its ethnicity and religion and how holding an election free of hate speech and fake news was important to strengthen the peace and reconciliation process in the country.