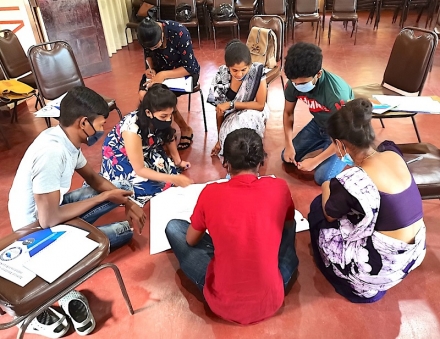 The first part of the training focused on basic human needs and identity, which is an important concept when learning to respect and accept other cultures. The second part explained conflict analysis and management, showing how that in order to resolve or manage a conflict, it was essential to understand the conflict. Participants analysed conflicts in their communities using the four tools of the conflict tree, conflict mapping, the conflict layer model and timeline.

The next stage of the training was to identify the pluralism process to understand the importance of living and interacting with all religions and cultures. There was a discussion on the role and responsibilities of youth in building a pluralistic and peaceful society.

Among the other topics discussed were minority religious rights, overcoming prejudice, facilitating dialogue between communities, gender rights and the political will to bring about sustainable peace.

Participants spoke about releasing people convicted of war crimes from both the armed forces and the LTTE and their appointment as public officials as well as the issues of gender rights and discrimination against the LGBTQI community. They stressed the need for new legislation to safeguard the rights of these communities.

Female community leaders said the sessions on the conflict management process was useful because women had difficulty in getting the message across at the grassroots level. They were confident that the training programmes would create a better understanding among their communities and promote collective efforts to overcome common challenges.