Exploring Religious Freedom and the Rule of Law 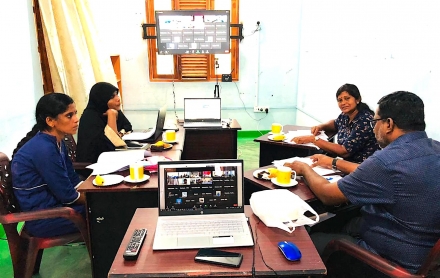 The Collective Engagement for Religious Freedom (CERF) project conducted a training session on religious freedom and rule of law for the 48 members of the Religious Freedom Network using an online communication platform, which was both a challenge and a novel experience for the project team as well as the regional partners of the network.

The NGO network was established by the CERF project in 2019 to promote and protect religious freedom in the selected localities, highlighting the importance of community level collective efforts for the promotion and protection of religious freedom, which also serves as one of the projects overall objectives. The network consists of members of civil society organizations representing the 12 locations where the project is implemented.

The training session, which was facilitated by lawyer Jagath Liyana Arachchi, was conducted to raise awareness of the new NGO network members on religious freedom and rule of law.

Participants expressed their views and raised questions on issues pertaining to the enforcement and enactment of rule of law within the constitution. Many participants said that laws were in place but not enforced, adding to the deterioration of rule of law.

“We should understand that culture and practices differ from one religion to another. Hence, there should be tolerance among religious communities which will pave the way for true religious freedom which is beyond the grasp of justice and law but within ones’ self,” said M.S.M. Ikram, a participant from Addalachenai.

“The NGO network is a solid platform for us as members of civil society to collectively make a broader and more effective impact in advancing the discourse on religious freedom. As each of us represents different localities, we can focus on creating a localised impact and move on to make a national level impact,” said Bhanuka, a participant from Kuliyapitiya.

CERF also conducted a series of sessions to collect recommendations from religious leaders, state officials and members of civil society on religious freedom to be submitted to the constitutional drafting committee.

The sessions were held using an online communication platform. Participants came from the 12 districts where the CERF project is being implemented. They were given an introduction to existing domestic constitutional provisions on religious freedom.

“Religious freedom of minorities is being hindered. If proper enforcement and implementation is not being practiced, it doesn’t matter if there are a thousand laws in the constitution,” said Father Nalaka from Addalachchenai.