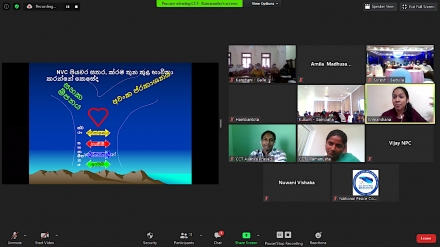 NPC carried out a series of training programmes on Non Violent Communication (NVC) for Human Rights First Aid Centre (HRFAC) volunteers in nine districts through its Accountability through Community Engagement and Initiatives for Transition (ACE-IT) project, which is supported by the European Union (EU) and the Open Society Foundation (OSF). Right to Life Human Rights Centre is the local partner.

The training programmes, which were scheduled to be carried out in Colombo, were restructured to address travel and gathering restrictions placed by the government due to the spread of Covid-19. They were conducted online and offline by the Centre for Communication Training (CCT) with 277 HRFAC volunteers participating.

The volunteers learnt basic NVC methods and familiarised themselves in the practical application of NVC when dealing with victims and survivors and when intervening in conflicting situations.

During the training, both online and offline activities were carried out with support from NPC beneficiaries who had previously received NVC training. A majority of HRFAC volunteers were receiving NVC training for the first time and showed interest in its application in actual situations.

The questions centred on how to observe without judgement when carrying out human rights work, especially when working with victims and survivors to avoid judging them and how to express their feelings fully and honestly.