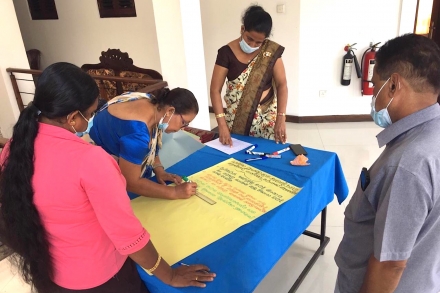 A national workshop for 62 Local Government Authority (LGA) members from different political parties on building a pluralistic society was organized by the Consolidating Ongoing Multi-Level Partnership Actions for Conflict Transformation (COMPACT) project via a hybrid Zoom and face-to-face interaction.

The theme of the workshop was to promote the importance and value of a pluralistic society and to examine the legal provisions in the country to foster pluralistic values. Participants gathered in their respective districts while resource persons and the NPC staff facilitated the workshop from their homes. Five LGA members from each district took part and a majority of participants were female as a result of NPC’s efforts to empower and strengthen women’s participation in decision making roles.

The resource persons were NPC Executive Director Dr. Jehan Perera, who spoke on the importance and value of a pluralistic society, and lawyer Jagath Liyana Arachchi, who explained the legal provisions to promote pluralistic values in society. The lectures were followed by a group activity where the participants discussed and suggested ideas for creating a pluralistic society to be included in the new constitution.

Some of the suggestions that came up were the need for the government to take decisions regardless of political and religious influences; the importance for school children to be educated on pluralistic concepts from an early age; strengthening Provincial Councils; and the need for resolving language disparity.

Participants presented their proposals, which will be taken on by a panel to develop a proposal to be presented to the constitution drafting committee. Participants were thankful for the opportunity to express their ideas and suggestions that could help the country embrace pluralistic values on its path to peace and reconciliation.