Promoting the Rule of Law and Religious Freedom 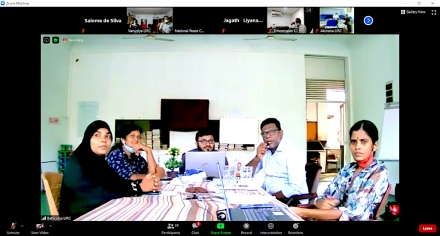 A participant from Negombo pointed out that there were enough laws but they were not implemented and asked what could be done to remedy the situation. Mr. Liyana Arachchi replied that the rule of law was affected by many factors that were not directly linked to the justice system. “As responsible citizens, we are tasked to voice our concerns about the decisions made by the government,” he said.

The training programme is the continuation of the one held in November.

Also under the CERF project, a programme was held for Vavuniya LIRC members including religious leaders, government officers, civil society members and other social activists.

The Public Health Inspector of Vavuniya spoke on Covid-19 and how LIRC members could contribute to combat it.

At the next session, the results of the survey on religious freedom conducted by CERF project were discussed so that they could be taken into the account when planning activities in the division.

It was recognised that caste played a negative role in Hindu and Catholic communities to hinder certain groups from enjoying their religious freedom such as not being allowed to enter religious places of worship.

There was a discussion on conversion to another religion. Participants mentioned that the Hindu community was more vulnerable and some had converted to Islam and Christianity. Hindu religious leaders said that they had no objection to conversion if it was done with proper understanding and knowledge but since conversions mostly took place because of poverty and vulnerability, they believed that it was a violation of their religious rights.