Phase III of NPC’s Reconciling Inter Religious and Inter Ethnic Differences (RIID) project, which was implemented with partner organizations that collaborated with District Inter Religious Committees (DIRCs) at the district level to build support for a Transitional Justice (TJ) process within the framework of the Geneva Resolution, concluded after nine months.

Reflecting the positive changes in relations between civil society and the government in the past two years in relation to the reconciliation process, NPC Executive Director Dr Jehan Perera was invited by the Sri Lankan government to join the official delegation to Geneva to represent a civil society point of view at side events during the UN Human Rights Council sessions.

Religious clergy and civil society activists from across the country on Monday urged the government to take concrete steps to ensure that peace and reconciliation were established in post war Sri Lanka.

The leaders handed over a six-point resolution to the Minister of National Co-existence Dialogue and Official Languages Mano Ganesan, Chairperson of the Office for National Unity and Reconciliation Chandrika Kumaratunga and Secretary-General of the Secretariat for Coordinating Reconciliation Mechanisms Mano Tittawella at a National Inter Religious Symposium organised by the National Peace Council (NPC).

The symposium was held under the NPC’s project that set up 12 District Inter Religious Committees (DIRCs) comprising leaders of all religions and ethnic groups, government officials, university academics and students and youth representatives.

The DIRCs worked towards conflict transformation and reconciliation by building support for the transitional justice process, especially truth telling and trust building within communities.

In the resolution the leaders urged the government to bring back to normalcy the lives of people who have been evicted from their homes and properties, pointing out that many of them are without homes or incomes even today.

The leaders said civil administration should be strengthened in keeping with the 19th Amendment because security forces still intervene in civil administrative activities and this hinders the freedom of life of the people in these areas. They added that the lethargic manner of working by certain government officials has hindered the improvement of infrastructure facilities and provision of various essential services.

The third point in the resolution said that there has not been specific and speedy action on missing persons and those who have been made to disappear illegally. “We firmly hope that the State mechanism for acting on the above matters will be strengthened and that action is taken to fulfill justice for the people affected directly and indirectly due to the war.” The leaders also asked for a compensation process without any form of discrimination.

The resolution pointed out that extremist political activity and extremist religious groups and individual activities were destabilizing society and called for several measures to avoid such situations such as the establishment of social protection monitoring committees, strengthening the action of the Women and Child Protection Committees and conducting formal counselling services aimed at those subject to severe mental stress.

The final point in the resolution suggested several steps for building national reconciliation including implementing the national language policy and paying attention to activities that will improve inter-relationships among the communities.

“If there are political groups, religious groups, government officials, civil society actors who will disrupt reconciliation, take legal action against them unmindful of their status,” the resolution said. 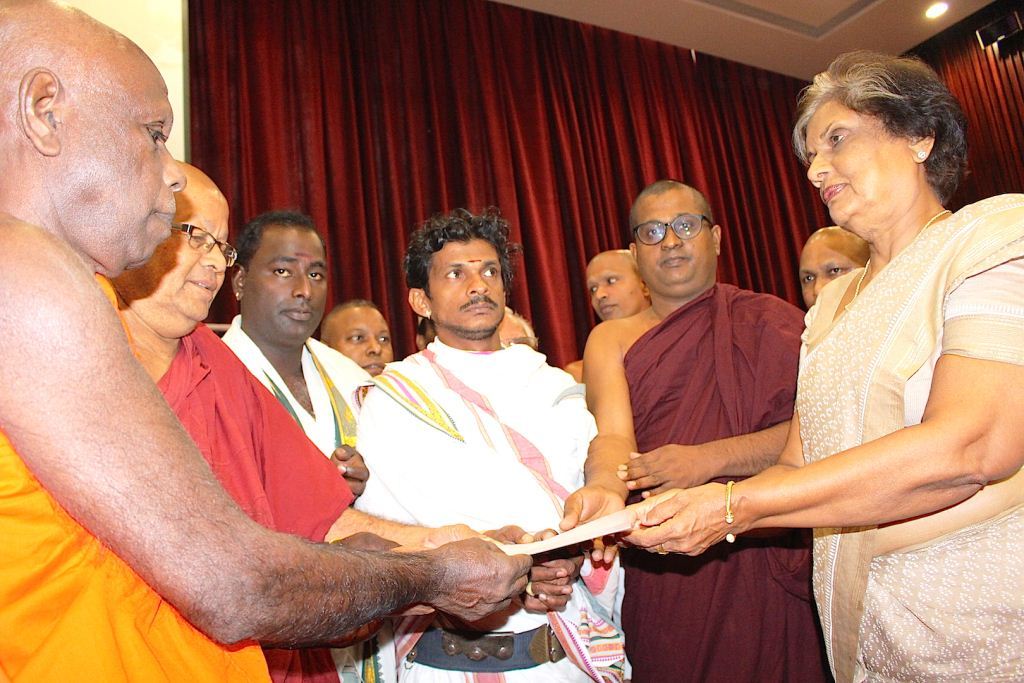 About 360 religious leaders, civil society activists and government officials attended a National Inter Religious Symposium organised by the National Peace Council under its project Reconciling Inter Religious and Inter Ethnic Differences (RIID). The project was supported by USAID/SPICE and CAFOD.

Addressing the symposium, Ministry of National Co-existence Dialogue and Official Languages Mano Ganesan said coexistence meant different communities should keep their identities while understanding their differences. He stressed the need to take dialogue and discussions to the grass roots so that people could participate in the reconciliation process.

Former President and Chairperson of the Office for National Unity and Reconciliation Chandrika Kumaratunge said that reconciliation would not be successful without relationships between the religions in the country.

She commended NPC for working to bring together religious leaders to work together. “All organisation for reconciliation must get together and work on a long term basis,” she said, pointing out that most politicians were opportunists who had forgotten the importance of solving problems.

She urged the government to carry out its promise to formulate a new Constitution, adding that it should go beyond the 13th amendment, which “wasn’t sufficient.”

Another important issue, Mrs Kumaratunge said, was missing persons. Relatives of those who had disappeared must be given answers by the security forces. If not, they would always go on searching.

Mission Director of USAID Dr Andrew Sisson thanked NPC for its valuable work to advance peace and reconciliation and added that USAID was glad to support a project that had created an impressive network for communities to build bridges.

“Bringing peace is still work in progress and it is challenging…We applaud steps taken by the government and civil society to engage the public in reforms,” he said, adding that every community had an important role to play in bringing peace, reconciliation and national identity.

He urged the participants to keep sharing lessons learnt and experiences and to keep pressuring national leaders to promote peace and reconciliation.

Norway’s Charge d’Affairs Knut Nyflot pointed out that religious leaders could solve problems before they escalated and spread. They could influence thinking and attitudes of people.

“The Norwegian government values people’s participation in government and supports NPC’s work in bringing people together,” he added.

The major task of the DIRCs is to strengthen reconciliation building action among the various religious and ethnic communities based on the transitional justice process. Other donors contributing to the inter religious activities of the DIRCs are Misereor, the Asia Foundation and the British High Commission, with Norway providing core support to NPC. They also support civil society in the reconciliation building process at grass root level through intervening to reduce inter ethnic and inter religious unrest and conflicts. 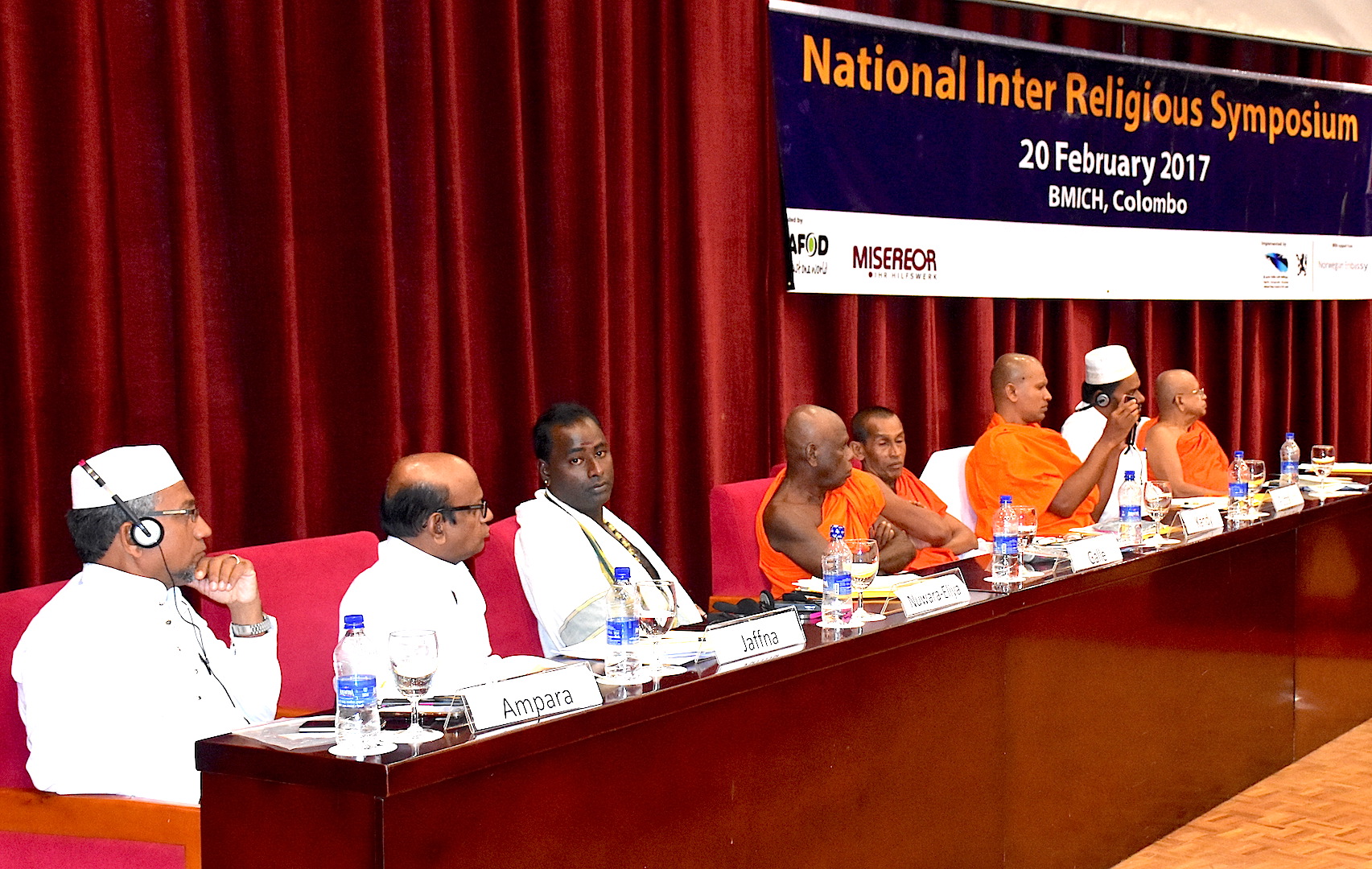 A meeting of National Inter Religious Committee (NIRC) was held in Colombo under the project Reconciling Inter ethnic and Inter religious Differences (RIID), which is funded by USAID through the SPICE project. Sixteen religious leaders and 15 district coordinators representing 15 DIRCs participated.

NPC staff members met several Buddhist monks in the Polonnaruwa district to get their support for the reorganization of the Polonnaruwa District Inter Religious Committee (DIRC). They first visited the Talpotha temple in the Lankapura Divisional Secretariat division and spoke to the chief incumbent of the temple Ven. Mahadivulweva Pangnarama, Deputy Principal of Sri Perakumbha Maha Pirivena, who is an active DIRC member.