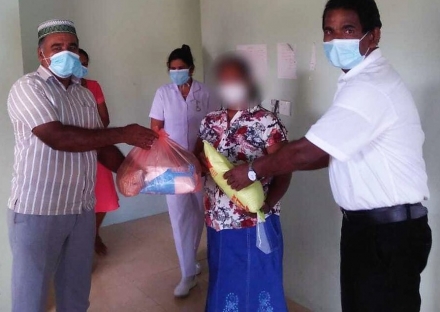 Under NPC’s project Plural Action for Conflict Transformation (PACT), members of District Inter Religious Committees (DIRCs) have been engaging in relief work to ease the burdens faced by disadvantaged people and charitable institutions brought on by the new wave of COVID-19.

Polonnaruwa DIRC distributed 130 packs of dry rations to families residing in Giritale and Nugagahadamana donated by Mr. Nilaiddin, a member of the Polonnaruwa DIRC and chairman of the Nugagahadamana mosque with the assistance of Mr. Samad Hajiyar. The Grama Niladari, Family Health Officer and Moulavi of the village mosque also participated in the programme.

Polonnaruwa DIRC also gave packs of dry rations to the Ratnapala Bhikku Vivekaasramaya, which is home to 10 adult monks who are in ill health, funded through donations from several NPC officials.

Ven. Ragala Sumidhalankara Thero, Rev. Lenin and Rev. Fr. Raman Polraj, members of the Nuwara Eliya DIRC, donated packs of dry rations to families affected by the pandemic in Nuwara Eliya. Matara DIRC distributed four packs of dry rations to families residing in Gandar, funded through a donation from a family in Italy. Young activists of the Matara DIRC participated in distributing the packs.

Rev. Luke Edirisinghe of the Nannapurawa Methodist Church, who is a member of the Monaragala DIRC, gave medical equipment to the Medagama Centre, which is a Covid-19 intermediate treatment centre.

At the Puttalam DIRC July monthly meeting, face masks that were donated to Sundararama Kurukkal by the Sunlove Organisation were distributed among DIRC members.